To our Cherished Guests...

Due to the ongoing restrictions on large gatherings and other safety concerns, we have made the difficult decision to postpone our June 6 festivities in Kansas City.

Although we are unable to celebrate with all of you as planned, Lauren and Jacob have decided to proceed with their wedding ceremony on June 6 in an intimate family gathering. They look forward to celebrating their marriage with everyone at a later date.

While we reschedule, we hope you will enjoy our wedding invitation as a reminder of the celebration to come. We encourage you to check back here, www.laurenandjacob.com, for the latest updates on our new plans. 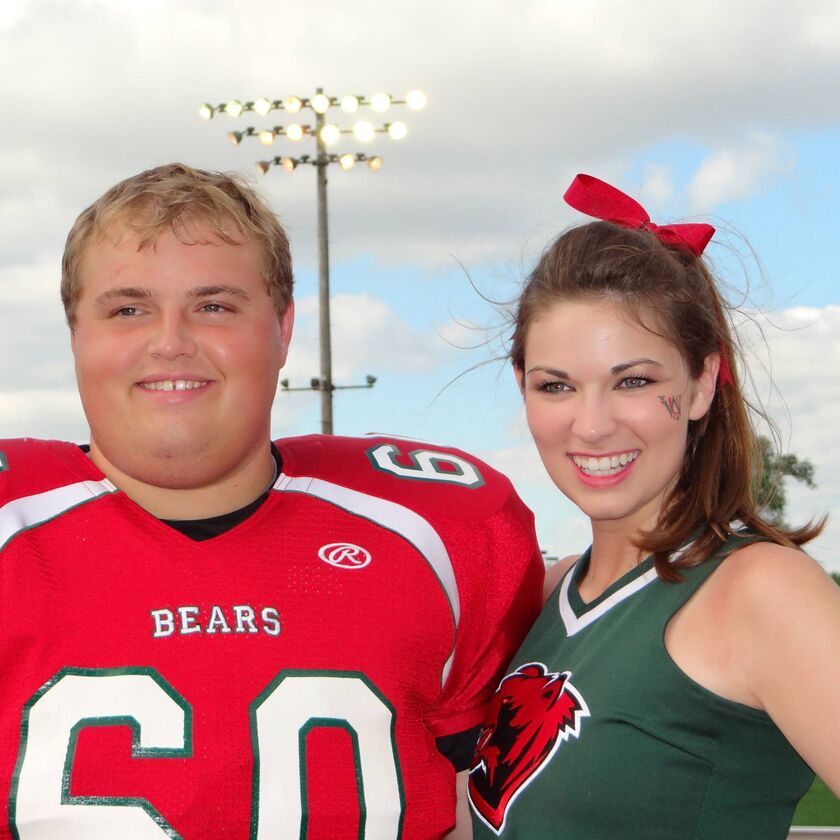 "Hi, I'm Jacob! Welcome to FSAP!" Jacob, an RA for the Freshman Summer Academic Program, beamed his typical gap-toothed grin as he greeted Lauren outside Lee Hall. Lauren packed way too much for the mere 5-week summer program, but Jacob carried everything in without complaint. Little did she know this sweet, Southwest Missouri boy would one day become her whole world. As luck would have it, Jacob's room was right next door to Lauren's that summer. The pair quickly developed a friendship, and Jacob, an offensive lineman on the WashU football team, convinced Lauren to go out for cheerleading. After weeks of cheering for Jacob on the football field that fall, mutual best friend and fellow FSAPer, Maddie McGraw, played the perfect matchmaker. She convinced Lauren to attend the Beta Halloween Party with Jacob, and the rest was history. Six years later, the couple is excited to become Mr. and Mrs. Haskins at last!

Shelby is the sister of the groom, and the sister the bride never had. Lauren knew she and Shelby would be friends when Shelby added Lauren on Facebook only two weeks after Lauren and Jacob started dating. When the two finally met, Lauren was instantly impressed by Shelby's beaming smile and outgoing personality. Since then the two have enjoyed countless laughs and created many memories together. Lauren prayed that one day the two would actually become sisters, and now that that day is here, there is no one else Lauren would rather have by her side.

Libby is a fellow Fulton girl and a long time best friend of the bride. The two met in middle school and became friends through their involvement in the Fulton Band. Even after attending universities hundreds of miles apart, Libby and Lauren remained close. Lauren always knew Libby would be by her side on her big day!

Taylor is a close friend of the bride and groom. When Jacob met Taylor at Mizzou Law orientation, he knew Taylor and Lauren just had to meet. The two girls clicked instantly, and their mutual love of everything JCrew, Lilly Pulitzer, and Jack Rogers made them inseparable. Taylor acted as Lauren's big sister throughout law school, and she cannot imagine her big day without Taylor by her side.

Maddie is a close friend of the bride and groom and is credited as Lauren and Jacob's matchmaker. Lauren and Maddie both participated in FSAP prior to their freshman year at WashU. It was here that Maddie befriended Jacob, who was an FSAP RA. Throughout their WashU years, the three of them enjoyed many late night runs to John's Donut among other adventures. For years Lauren and Maddie have planned out this day, and Lauren cannot wait to have Maddie by her side as their dreams become reality.

Nicholle is a close friend and sorority sister of the bride. Lauren and Nicholle met on their freshman floor, Dardick 3. It was clear that the two girls had a lot in common, and they were thrilled to become Kappa Deltas. Throughout their WashU years, Lauren and Nicholle enjoyed countless mixers, date parties, and sisterhood events together. After college, the two remained close, supporting one another as they both pursued their JDs. Lauren cannot wait to reunite with Nicholle as she prepares to walk down the aisle!

Ki is a close friend of the bride and groom. Lauren met Ki at FSAP where their dorm rooms were right next door. They also happened to live right next to Jacob the FSAP RA. After that summer, Lauren and Ki were inseparable. They frequently hit up Jacob for rides to John's Donut throughout their freshman year and beyond. Lauren and Ki went on to become roommates with their besties Ereka and Lily. Lauren is excited to get the four girls back together to celebrate her big day!

Chandler is a close friend of the bride. The two met during tryouts for the WashU Bears' Cheer Team. Lauren was in awe of Chandler with her amazing spirit and perfect split. As members of the Cheer Team, the girls became best friends. Lauren quickly learned that Chandler was a fierce supporter both on and off the field, and she is so thankful that Chandler will be by her side on her big day.

Ereka is a close friend of the bride and groom. Lauren and Ereka met at FSAP where Ereka and Ki lived in the dorm room next door. Ereka was a member of the WashU Women's Basketball team, and Lauren enjoyed cheering for Ereka on the basketball court throughout their WashU years. Ereka was also part of the ELLK suite of roommates with Lauren, Lily, and Ki. Lauren is excited for an ELLK reunion as she prepares to walk down the aisle.

Lily is a close friend of the bride and groom. Lauren and Lily met while at FSAP through mutual friend Ereka. Lily was also a member of the WashU Women's Basketball Team, and Lauren enjoyed cheering Lily on on the court throughout their WashU years. Lily also lived in the ELLK suite with Lauren, Ki, and Ereka. Lauren cannot wait to reunite ELLK as she celebrates her big day!

Kailyn is a close friend of the bride. The two met and became friends through their involvement in Fulton Middle School and Fulton High School Cheerleading. Lauren and Kailyn enjoyed frequent trips to Sonic between school and cheer practice during their high school years. Lauren is so excited to have Kailyn by her side on her big day.

Pete (AKA: Perapadh) is a close friend of the bride and groom. Jacob met Pete while rushing Beta Theta Pi fraternity. During Jacob's pledge interview with Pete, Jacob realized how much the two had in common and they became friends instantly. While Jacob was an FSAP RA during his sophomore summer, Pete came over to Lee Hall almost every day. That summer Jacob went on to set Pete up with Pete's future wife and Jacob's best friend, Kenzie. Jacob and Lauren enjoyed double dates with Pete and Kenzie throughout their WashU years. The couples have remained close ever since. Jacob knew that once the big day came, Pete would be right by his side.

Alex and Jacob grew up together in Lamar where they friends since their earliest days. The two quickly bonded over their love of the Chiefs and all things sports. Jacob used to tease Alex, a John Deere man through and through, about the superiority of International Harvester. The two still enjoy spending time at gun shows and keeping in touch even though they live a few states away. Along with Brett, the two put together a run unlike ever seen before when they won the 2007 Lamar Rotary 3 on 3 basketball tournament.

Brett and Jacob grew up together in Lamar and were inseparable throughout their time in school. The two played football together for 8 straight years with their first year on the Lamar Jets where Brett was the guard and Jacob was the tackle on the offensive line. After his brief stint as an offensive lineman, Brett became the team's quarterback and Jacob spent the next 7 years trying to keep the defense off him. Jacob has spent countless hours at Brett's house eating some of Miss Nelle's home cooking, playing basketball in his driveway, and playing Madden '04 before every single home football game since 7th grade (Jacob calls dibs on being the Vick led Falcons).

Connor is a close friend of the bride and groom. Jacob met Connor during his 1L year at Mizzou Law, where they were in the same section. Connor, a KC native, bonded with Jacob over their love of the Kansas City Chiefs and Royals. As a member of Jacob's law school crew, the two created countless memories together throughout law school, including many days spent searching for lost drives together during their many rounds of golf.

Ben is a close friend of the bride and groom. Jacob met Ben his 1L year at Mizzou Law, where they were in the same section. Ben graciously invited Jacob over for study sessions during their 1L fall. Lauren will never forget Jacob calling her after going to Ben's house for the first time. Jacob was so grateful and impressed that Ben's amazing wife Rachel had even provided them study snacks. Since that day, Lauren knew the two would become friends. As a member of Jacob's law school crew, Ben and Jacob have spent countless hours studying, golfing, and laughing together over the past three years.

Kevin is a close friend of the bride and groom. Jacob met Kevin his 1L year at Mizzou Law. Jacob and Kevin bonded over their love of hunting and the outdoors. Kevin and Jacob have spent many Wednesday nights at Texas Roadhouse. Throughout law school, you could also often find Jacob and Kevin with Rob and Lauren splitting the 2 for $20 deal at Applebee's.

Rob is a close friend of the bride and groom. Jacob met Rob his 1L year at Mizzou Law, where they were in the same section. As a 3L, Rob served as the Editor in Chief of the Journal of Dispute Resolution. He opened his office to the law school crew, where countless memories were made. Rob was also the musical mastermind behind the Soggy Bottom Boys Tribute Band along with Jacob and Ryan. Lauren hopes the boys will get the band back together for one final performance to celebrate the special occasion.

Ryan is a close friend of the bride and groom. Jacob met Ryan his 1L year at Mizzou Law. The two bonded over their love of politics. Ryan, Rob, and Jacob also joined together to form a tribute band to the Soggy Bottom Boys. After a 1st place finish at the 2018 Mizzou Law Talent Show, the band sadly broke up. But Jacob is excited to get the band back together for his big day.

Justin is a close friend of the bride and groom. Jacob met Justin his 1L year at Mizzou Law, where they were in the same section. A fellow member of the law school crew, Jacob and Justin enjoyed spending many hours together throughout their law school years. Justin and his fiancée, Chelsea were also instrumental in the purchase of "Scout" the bear.

Bill is a close friend of the bride and groom. Jacob met Bill his 1L year at Mizzou Law, where the two were in the same section. Since then, Jacob and Lauren have enjoyed Bill's friendship and gourmet cooking. As a member of Jacob's law school crew, Jacob and Bill created many memories together throughout law school.

Thanks, we've received your .

Need a place to stay during the wedding?